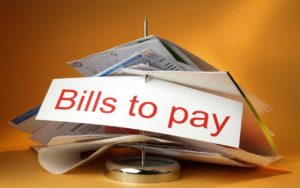 The children are playing with their gifts, the new TV is up on the wall, and that puppy has a brand-new cashmere-lined bed, when another gift arrives in the mail. This one isn’t from Santa. It’s your statement from your friendly credit card company. They want to know how you’re going to pay for all this.

The average American consumer will have spent more than $1,000 on gifts this season, according to the National Retail Federation. And with six out of 10 Americans not having at least $1,000 in savings, that money has to come from somewhere else, typically a credit card or a personal loan.

Credit card balances typically shoot up in December, soon to be followed by a noticeable tick-up in credit card delinquencies in January and February, as many Americans borrow too much to pay for gifts and then struggle to figure out how to pay off the debt. While delinquencies remain far below what they were in the Great Recession, there are still millions of Americans who live paycheck to paycheck and additional debt can become a big problem quickly.

The first thing you need to do is create a list of all credit cards you have, the balances on them, the interest rates and when each credit card payment is due.

Now that you know what the damage is and where it’s coming from, there are typically two ways to pay it off. One is the “snowball” method made popular by radio host and financial advice giver Dave Ramsey, which is to pay off your highest interest rate credit cards first. Then transfer the funds you’ve been using to pay off those high balances, once paid off, to then aggressively pay off the smaller balances.

Sometimes you need a bit of a boost of self-confidence to help encourage you to tackle the bigger challenges. The other option is to pay off several small balances first, said Greg McBride, chief financial analyst at Bankrate.com. This option isn’t as financially efficient, but it might be better for your mental well-being.

“Oftentimes paying off a few small balances reinforces your need to make sacrifices and puts a bit of wind in your sails,” he said.

But paying off small balances should not cause you to neglect aggressively paying of the higher balances once they are all you have left, McBride said.

Another common method to pay off holiday gifts is to use your upcoming tax refund. But personal finance experts recommend trying to plan ahead so you’re not having to rely on Uncle Sam (and the whims of the United States Congress) to make sure you can cover your expenses.

Using your emergency fund, if you have one, is not recommended to pay off holiday debt. Unless you have an explicit plan to rebuild those savings, and not touch them in the future, it’s best to leave those funds for true financial emergencies.

To avoid being in this situation next year, try be more proactive about your budgeting each month.

“Be intentional about giving every dollar a name every single month before the month begins,” Ramsey said. “And stick to your plan. With a budget, you’re able to tell your money where to go instead of wondering where it went.”

One long-term suggestion McBride and other financial experts recommend is try to plan ahead for next year’s holidays. Add up all the money you spent on gifts and vacations this year, and then divide by 12. That gives you a monthly amount to set aside that will help you not end up in the same situation a year from now.

If you need financial help call our Consumer Credit Counselors for assistance with your debts or budgeting at 712-252-1861 ext. 47. WE CAN HELP!